DISSOLUTION PROLOGUE (Extended Version) - Selection #1, In and Out Window


Futur Antérieur, a screening series organized by Re:Voir in conjunction with there new editions, takes place at Cinema Archipel every month.


SIEGFRIED A. FRUHAUF | NATURE AND ABSTRACTIONS 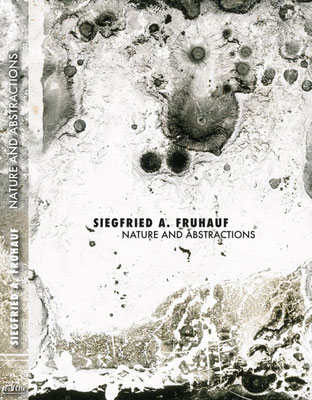 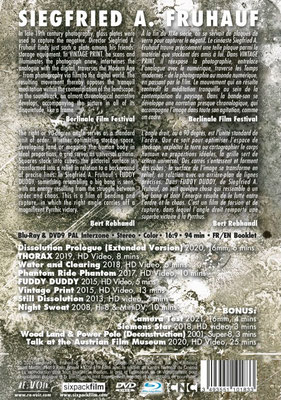 Siegfried A. Fruhauf sees cinema as a natural process in the broad sense. It is that nature as a subject in his films always serves as a poetic investigation into the laws of the cosmos and the universe. His aesthetic enterprise therefore consists in projecting us beyond perceptual habits, to see the celestial bodies that hide in the lining of a landscape. To do this he uses the camera like a scientific device, that is, as an instrument capable of taking what is invisible to the human eye. The images that will appear next can no longer be deciphered by physics or mathematics. What they show stems from the disaster of burning and dying stars.
In order to carry out this translation where the camera gives us a way to interpret the language of the stars, the filmmaker pushes the limits of the camera as a tool. It is by accentuating the decomposition of the film or the interference of the grain that he realizes sincere odes to disorder. Thus, his images derive their power from the fact that they bring the device to the fore, that they bring the life of the machine to the screen. New filmic manifestations arise from representation "errors", proving that there is a cosmos in every image, however small.
In fact, among cosmic phenomena, it is perhaps "dissolution" which constitutes the central leitmotif of the works of Siegfried A. Fruhauf.  In Night Sweat (2008) the dialogue between nature and the nature of the film continues to question the limits of the machine, but sublimates the interferences. The zooming assaults in the night eventually liquefy the image to suck us into a chaotic universe where our minds project black holes on the dance of pixels. By disorganizing the image in this way through a craft of intoxication, the filmmaker breaks with the idea of classical representation. It dissolves matter and plunges us into a plastic mess that only our inner world can rearrange. The real then opens up to new modes of structuring imagination. This creates a political approach by filmmaker, who brings into play the foundations of objectivity as if to better invite us to rethink the world.
“We live with the idea that there is no alternative, that if the world turned out otherwise everything would fall apart. This is not true. There is another order, and it works too. When the Earth was flat, it worked too.“ Siegfried A. Fruhauf, Talk at The Austrian Film Museum, video recording, January 11, 2020.
Drawing on this history of cinema which brings together Man Ray and Marcel Duchamp, the work of Siegfried A. Fruhauf constantly sheds new light on the limits of moving image. His free and non-academic approach to the Austrian heritage (Kren, Kubelka, etc.) indicates that it is less for him to "show something else" than to find a "new way of seeing" the familiar. As a result, as evidenced by the archaeological montage of his films, his work indeed finds it’s place in a process of updating our reality. We think here of his way of piling up traces of images, to make the disappeared and the dissimilar coexist at the "infinitely small point of the present". Fruhauf's cinema apprehends time and phenomena through the prism of repetition; and everything is reborn to the rhythm of the hypnotic sound loops of Anna Katharina Laggner and Jürgen Gruber.
- Etienne Bomba, trad. Jim Stickel, Re:voir (2021)

We strongly warn viewers of hallucinogenic side effects! The cinematic works by Siegfried A. Fruhauf are a radical challenge to our senses. What usually starts out as a cautious beginning soon increases into a wildly flickering firework of images and sounds, which consist of mountain panoramas and holiday snaps, analogue film grain and scratches, and even pure light.

Siegfried A. Fruhauf, who was born in 1976 in Grieskirchen in upper Austria and who grew up on his parents' farm, came into contact with his country's diverse avantgarde film scene after training as an industrial salesman, and in 2004 he graduated in experimental visual design from the University of Linz. Since then, he has made around 40 films, most of them under 10 minutes long, as well as countless installations and photographic works that have been screened around the world. In regard to his way of working, Fruhauf – who no longer feels the need to be explainable – says that he "does not want to create illusion, but rather destroy it, in the sense of showing what is possible with the material." But he "likes to emphasise the raw, the handmade and the seemingly unfinished, thereby alluding to the vulnerability of the individual film image." (Stefan Grissemann). In the programme of ten films, which the artist selected specifically for his visit to Basel, "landscape, cosmos and dissolution alternate, while abstraction and visual intensity exist alongside nature and reduction." (Fruhauf) An oeuvre of truly pictorial intoxication is presented here. (bb)